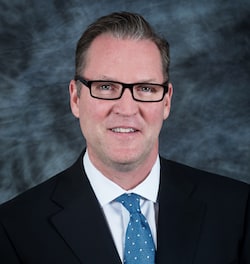 Attorney Bradley Hofland is the Founder and Managing Partner in the firm of Hofland & Tomsheck. Mr. Hofland founded the firm in 1997 and has dedicated his practice since that time to representing individuals, families and businesses in the Western United States, including Las Vegas.

Attorney Hofland has served as lead counsel on thousands of cases in the Federal, District and Family Courts in Nevada and California and specializes in complex civil and family law litigation.

Attorney Hofland has successfully represented the interests of his clients in complex and contested matters in the civil, business and corporate litigation arenas on behalf of both business and individuals. Mr. Hofland routinely represents parties in litigation where six, seven and even eight figure values are in dispute.

Mr. Hofland has developed a reputation as one of the top family and domestic law Trial lawyers in Southern Nevada. Brad has litigated thousands of family law cases over issues involving divorce, child custody, spousal and child support and adoption. Mr. Hofland’s experience and reputation with the Court’s and Judges in Las Vegas make him a highly sought after advocate on behalf of individuals and families. Brad’s reputation is such that he is routinely asked to represent other lawyers, and even former judges, when they need an experienced and effective advocate in their own personal family law cases.

If you have a civil, business or family law matter and need an experienced and aggressive attorney who will diligently and confidentially advocate on your behalf, call Bradley Hofland, and the Law Firm of Hofland & Tomsheck, today.