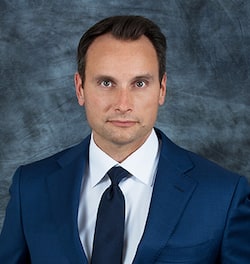 Attorney Josh Tomsheck is a Partner in the Las Vegas Trial Lawyer firm of Hofland & Tomsheck and heads both the Criminal Trial and Personal Injury Practice Groups for the firm. Mr. Tomsheck is a veteran Las Vegas Trial lawyer who has chosen to commit his practice to fighting for the rights of others who have been injured or charged with crimes.

Prior to forming Hofland & Tomsheck with long-time Las Vegas Attorney Bradley J. Hofland, who leads the firms Family Law and Civil Litigation practice groups, Attorney Tomsheck worked for many years as a Chief Deputy District Attorney in the Clark County DA's office as a criminal Trial prosecutor. Due to Josh's work ethic and skill in Trial he was promoted quickly within the DA's office and was assigned to the Gun Crimes Section of the Major Violators Unit where he specialized in Trials involving violent felonies and firearms cases.

After years of trying criminal cases to Nevada Juries, Josh chose to leave the public sector and take his skills and experience into private practice so that he could better help those in their times of need, whether they be injured at the fault of others or charged with a crime. Mr. Tomsheck focuses his practice on Litigation and Trial work and has served as lead Trial attorney on numerous civil and criminal matters in including: Personal Injury, Motor Vehicle Accident and Medical Malpractice cases in the civil arena and Capital Murder, Murder, Attempted Murder, Kidnapping, Robbery, Drug Charges including Trafficking in a Controlled Substance, Habitual Criminal and Gun Crimes in Nevada's Criminal Courts. Additionally, Josh has successfully tried countless cases involving charges of DUI (drunk driving) and Domestic Violence (domestic battery). Of the more than 150 jury and bench trials Josh has tried to verdict, his success rate is over 95%. Attorney Tomsheck has even argued numerous times before the highest Court in all of Nevada, the Nevada Supreme Court.

Mr. Tomsheck is one of only approximately a dozen criminal defense lawyers in Southern Nevada who are qualified and approved by the Clark County office of Appointed Counsel to be appointed first chair to defend Capital Murder cases in Las Vegas, pursuant to Nevada Supreme Court Rule 250. Additionally, Josh has been selected to multiple terms by the United States District Court for the District of Nevada to the Criminal Justice Act (“CJA”) panel to defend individuals charged with serious crimes in Federal Court.

Mr. Tomsheck is a Trial lawyer who has enjoyed numerous successes in Nevada Criminal Courts including “Not Guilty” verdicts at Trial on charges including Murder with use of a Deadly Weapon, Attempted Murder, Robbery (including armed Robbery), Conspiracy, Battery, Battery with use of a Deadly Weapon resulting in Substantial Bodily Harm, Battery with intent to commit a crime, Assault with use of a Deadly Weapon, Battery Domestic Violence, Driving Under the Influence (“DUI”), Tampering with a vehicle. In addition, Mr. Tomsheck is often retained prior to the charging of criminal offenses, while his clients are simply being investigated for a crime. Josh has often been able to negotiate with prosecutors and avoided the filing of any criminal charges, even in the most severe of allegations, including Murder and Sexual Assault as well as theft and property crimes.

Attorney Tomsheck's Trial and Courtroom experience includes numerous high profile cases which garnered local and national media attention. Attorney Tomsheck's cases have been featured in print media and he has appeared many times on local and national television including "48 Hours Mystery" on CBS, “Snapped” on the Oxygen Network and gavel to gavel trial coverage on "InSession" (formerly CourtTV). Josh's cases have included numerous live interviews on local and national television regarding various legal issues and criminal cases he has tried successfully to a jury and he has appeared as co-host on legal programming on CBS radio.

Attorney Tomsheck has been Nationally Board Certified as a Criminal Trial Advocate by the National Board of Trial Advocacy, one (1) of only four (4) in the State of Nevada. Additionally, Mr. Tomsheck has been recognized as a Specialist in Criminal Trial Advocacy by the State Bar of Nevada, one (1) of only four (4) lawyers in Nevada to carry this specialization. Josh is a proud member of the National College for DUI Defense, one (1) of only nine (9) members in Las Vegas to be a member of this prestigious organization. Josh's representation of the injured and accused has led to many distinctions and awards, including:

Josh is member of several organizations in order to best represent his clients and make sure he has the best litigation Training available. Josh is a member of the following:

Josh takes pride in his aggressive, effective and confidential representation of those facing the toughest times in their lives and has competently and quietly represented individuals in the legal community, members of law enforcement, business executives, professionals and professional athletes in cases where they have been unfortunate enough to wind up on the wrong side of the justice system.

100% of Practice Devoted to Litigation

If you have been injured due to the negligence of others, arrested for a crime, or know someone who has, we can help. Call us at (702) 895-6760 or submit your case online today.

We offer a FREE, no obligation case evaluation with our experienced criminal defense attorney. Contact the law firm of Hofland & Tomsheck - - "Fighting for Justice, Fighting for YOU!"